I am fascinated with the processes which happen on the sea shore, the interface of the sea and the land. I particularly like the environment where cliffs are being eroded by the waves and how the relentless pounding of the waves shapes the rocks. It produces a quite distinctive environment. The power of the sea can reduce the hardest rocks to sand and bring down cliffs. The granite pebbles on which I base my sculptures are shaped by the action of the sea . They have been sculpted by being battered against each other and the cliffs that they were once a part of. They have been pitted by countless random collisions. Rock has yielded to the action of water and the pebbles are on a gradual journey to becoming sand. I wanted to combine with these forms something of the forces which have shaped them ( I called the first piece in this series "Cause and effect" ) They say that you can hear the sea in a seashell; I can feel the sea in the rocks it shaped. The swirling wave-like forms which I use are reminiscent not only of the sea itself, but also of the shells of molluscs, (themselves shaped by the sea via natural selection) and the fissures and holes eroded into the rocks which form a seashore. Some of the sculptures have a moon-like feel about them, the surface of which has also been pitted by countless random collisions. This battered rock which orbits our planet exerts its pull on the tides bringing to bear its own input on the shaping of my pebbles. Creating rocks in its own image as it were. There are of course obvious parallels with Barbara Hepworth and Henry Moore in my work , both of whom have been an influence on me. The more I get into this project the more complex the initially simple "cause" has become.
Most of the pebbles I use are from Rinsey head, the rocky cliffs which jut out into the sea at Praa sands in SW Cornwall. Each piece is a limited edition of twenty-five resin/bronze castings, hand-finished and numbered. One of the pieces is cast in resin/dolomite. They can be ordered from this site. 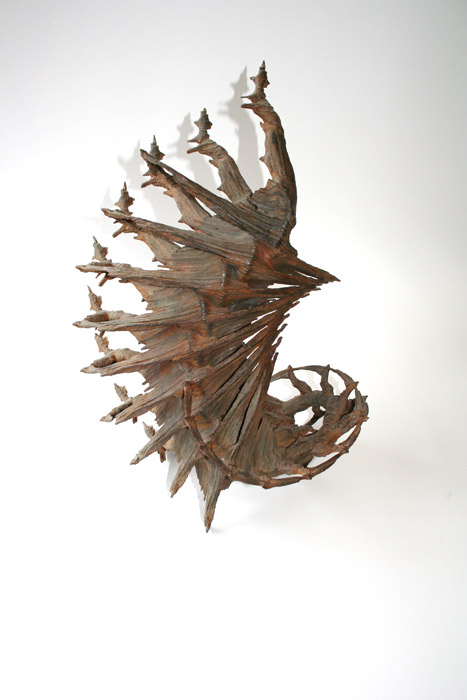