Knot: A hard mass formed in a tree trunk at the intersection with a branch
[Concise Oxford Dictionary]

A knot in a plank of wood appears as a round or oval shape, for all that is seen is a two dimensional cross section giving few clues to its three dimensional form.
It is only when a tree is allowed to decay that it becomes possible to see the astonishing beauty and variation in these structures. The wood is far more dense in knots so they remain intact long after the branches and trunk have disappeared. It is almost as though the dead tree has left a skeleton.

When I discovered such skeletal trees in a wood near my home in Cornwall, I collected some knots and, after taking moulds of them, used the castings to form sculptures.The results are very organic and skeletal in appearance, having a slight nightmarish quality about them. There is something about working with these forms which steers me in this direction. I often feel that it is like a kind of inkblot test in reverse, where I will stand back and look at the piece I have just created and ask myself why it has turned out like that. I suspect that there is a sub-conscious association between the twisted forms and the woods themselves, the imagery of folk stories where woods are dark and scary places full of spirits and malevolence. I wonder whether there is something hardwired into the human brain which has always interpreted the atmosphere of such places as otherworldly, recognising the life and fertility and perhaps endowing them with supernatural powers. We may have (largely) abandoned the belief in spirits but the mental processes, which would have instilled such beliefs in our ancestors, are still there, casting a shadow on our modern rational minds. I certainly feel that all of my pieces are already inside me, all I have to do is bring them out.Knowing that a piece is finished is as much a feeling of recognition as it is aesthetic.

Each sculpture is the result of putting two or more knots together, deciding whether or not I like that particular combination, and then proceeding to the next creative crossroads where the whole process starts again. The route to a finished piece is often torturous, consisting of dozens of mock ups and dead ends. The larger pieces comprise of 100-200 seperate castings.
Some of the pieces achieve their shapes through the very simple formula of fitting identical copies of a knot against itself, so it fits "comfortably" with its neighbours, producing elegant shell-like compound curves. The interaction of the elements of the sculpture dictate the overall body-plan, in a similar way to the interaction of genes in nature. I am sometimes filled with awe and excitment as I watch the sculptures forming as I work. In creating new forms in this way from elements of dead things , I am not so much playing God, as Frankenstein.
They are mainly finished by applying a cocktail of chemicals which induce oxidisation in the iron and leave a rusty patina which complements the ravaged surfaces and adds to the already confusing aesthetic.By way of contrast two of the pieces shown have been painted in vivid reptilian colours. I occassionally add other elements such as birds wings and chains as I see fit.
Compared to the more conventional methods of sculpting using clay or plaster, it is a very odd way to work. 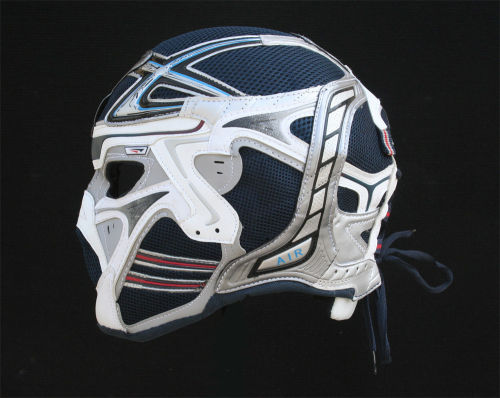