Séamus Moran was born in 1963 and grew up in the Midlands. He graduated at Birmingham Polytechnic, eventually moving to Cornwall in 1988. He lives in the village of Crowan with his wife and three sons. His other obsessions are music and his 1960 Buick. In 2015 he was accepted as a member of the Royal British Society of Sculptors
"Like all artists, I have always enjoyed making things. It's the idea of transferring something which was just a thought, into a tangible visual object which I find so addictive. Since I can remember I have painted/sculpted/assembled all manner of things from a variety of materials, gradually moving towards sculpture as my weapon of choice. Working in 3D produces objects; objects which can be viewed from different angles, seen in different lights and cast different shadows. They are tactile as well as visual, and have a real physical presence. I often hear people expressing how they enter into the world of a painting as a way of describing their experience of it. I see sculpture as the opposite of that experience ; the sculpture enters our world. Most of my work is about capturing a non-representational presence or rethinking conventional objects in an unconventional way.

I graduated in 1984 in Ceramics with glass and started work as a Model/mouldmaker in the Potteries in Stoke on Trent. It was here that I learned about production and how I could get to make exactly what I wanted time and time again. A twist of fate brought me to Cornwall in 1988, and another made me redundant. I went into business with my friend Richard in 1990 trading as Design Clinic, specialising in innovative resin-cast giftware (see www.designclinic.co.uk). I designed and sculpted almost everything the company has ever produced, creating a niche in the market for the fusion of styles which has become the Design Clinic trademark.
I have been a partner in Design Clinic ever since, mass-producing my designs and selling them world-wide.

I have been producing my own sculptures since 2001, selling them in galleries and solo exhibitions. 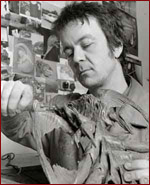 Many of these works are based around casts taken from knots weathered out of dead trees. Recently I have been producing more figurative pieces such as "Harness" and "Urban burka" which question our assumptions about the world and how everything fits into it. My work has won awards in several national/international competitions including the Threadneedle , NOAC and Passion for Freedom. "Harness" will be touring the Royal Armouries venues throughout 2017/2018
Next
Previous